"All the songs have this addictive, urging feel, taking the listener in a country where only few bands in this genre achieve to take us." Quebec Hardcore
The new french noise generation, walking on post rock 'n roll steps, finds its breeding ground on the notes of Membrane. Emerging from the pop-rock underground in 2000, Membrane, previously called Blindfold, rapidly grew up with noise bands, sharing the stage with Sleeppers, Tantrum, Doppler, etc and featured on the much sought after festivals Les Eurockéennes 2004 and Le Printempsde Bourges 2005 bills thanks to the quality and mouth-to-ear reviews on their first 'Stage box' cdep and their brand new debut cd 'Utility of useless things', captured by none-the-less than Serge Morattel adn mastered by Alan Douches. Membrane, given to live reviewers, is a power act. Seeing them live is a journey, a powerful and delightful sensation into the vaults of emotion, ambition and heavyness. Hastily labelled as a music close to Breach and Unsane, Membrane was at this time at the crossing point of cult 90's french bands Basement and Portobello Bones tending to more modern and loud bands such as Neurosis and this is right; Breach.
'Membrane take the noisy, blown, spittle-drooling-from-the-chin pigfuck of noise rock's heydey, mix in some earthshaking dirge metal a la Neurosis, and strap it to the back of a muscular post-hardcore assault that's similiar to the metallic attitude Jawbox copped after they toured with Helmet way back when.' Crucial blast
Behind this down-to-earth emotion that urges from their shows, Membrane is priorily a power trio who focuses on a firm composition with memorable and catchy riffs.
'Utility' had a massive guitar sound despite the fact one-take only was prefered by the band. Plus, merely no effect was added to the mix, which somewhat shows how the band put interest into rendering the most honest and primitive version of the tracks.
"The six tracks on UTILITY OF USELESS THINGS are a testament to heavy music, with lots of breakdowns; searing and chugging guitar work." Skratch magazine
Also, they had a short episode trying an extra member on guitar. That was only as short as unefficient which means obviously that the band had to remain a trio forever.
But where do they go from here ? Well 2 years later, some tours behind, the highly anticipated follow-up to 'Utility' is called 'A story of blood and violence' and presents 7 new tunes and a cover of Unsane, of course ! This time, they chose Niko of Kill The Thrill to record the new cd. 'Utility' was massive but 'A story' promised to be 100 more massive, and so it was. 'A story of blood and violence' was released in May 2007 on Basement Apes Industries.
As Membrane's music got darker and heavier on this album, we could not think that they would render and mellow their music. The arrival of Fred on drums will probably gives the trio the strenght to assume their blackest thoughts on world major issues and the way they opted to release them under the form of music. There's no doubt in thinking that 'Disaster", their 2010 third album drove further the nail. Angst and aggressiveness are the highlights of this album, their heaviest and most punishing record to date.
2010 was a busy year for MEMBRANE, increasing alot their capacity to tour around Europe. Across the road time, they met with labelmates SOFY MAJOR, which ended up in a whole tour together and a record partnership we are proud to be a part with once again. This release is dut out november 2011. 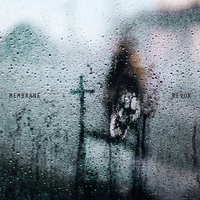 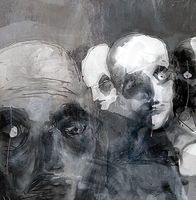 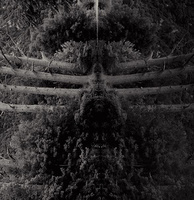 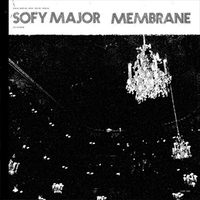 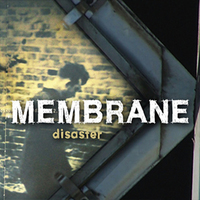 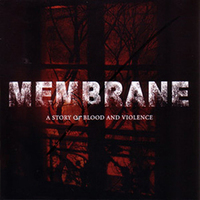 APES015 | MEMBRANE A story of blood and violence 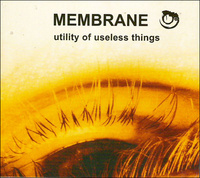